A woman has said the killing of her family’s pet boxer dog has been “absolutely heartbreaking”. 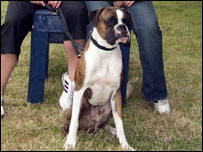 Three-year-old Brannigan was beaten to death and mutilated close to Carnlough in County Antrim.

The dog had been missing from its home in Carnlough for more than a week. Its remains were found in a field close to the village on Monday night.

Jodie Jones said Brannigan had been treated like another child in the house and described the killers as “scum”.

Brannigan had been missing from his owners’ home for eight days, however a post-mortem revealed he had been dead for just 72 hours.

post-mortem examination revealed Brannigan had been savagely beaten to death and mutilated with a blade. The animal’s front leg was also hacked off.

Ms Jones said her children would particularly miss the pet.

Stephen Philpott of the USPCA said the attack was savage, and this sheer barbarity cannot be allowed to go unpunished.

The family have offered a reward of £500 for any information which leads to the attackers being caught and prosecuted.

Related?
Pet Birds To Be Killed As A Precaution Against Bird Flu?

Supreme Court to Decide Worth of Killed Pet

June 15th, 2005 "A Brooke County woman aruged that she should get more than the appraised value of her late dog, which died after a 2001 hit-and-run accident.Story by The Associated PressSince Groucho wasn't a working farm animal, the owner of the dog killed in a hit-and-run accident should be eligible to recover damages."What next?Link

December 9th, 2005 Researchers have finished mapping the genome of the domestic dog. The results show among other things that dogs, mice, and humans share a core set of DNA.

October 12th, 2005 Wiping away tears and occasionally breaking down, the handler of a Long Beach police dog killed in a shootout said Tuesday the animal saved officers' lives the night he died. Ranger, a 4-year-old Belgian Malinois, will be honored during a funeral service Wednesday.

April 27th, 2005 Whatever killed several pets in the St. Clair and Vaughan Road area, may also have briefly made a man ill .Public health officials doubt it.

December 30th, 2005 A new case of bovine spongiform encephalopathy (BSE), or mad cow disease, has been detected in Poland, the country's veterinary service said. The disease was detected on a farm with a total of 18 animals.