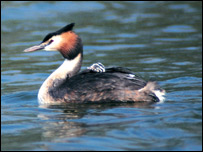 The virus was detected in a great crested grebe that was found dead in the northern province of Alava, the agriculture ministry said.

Spain gets 46 billion euros ($59 billion) in revenue a year from foreign tourists and the industry makes up about a tenth of gross domestic product. Most tourists come from the U.K., Germany and France. Hotel companies such as Sol Melia SA and airlines including Iberia Lineas Aereas de Espana SA depend on tourism for profit growth.

The Spanish authorities said there was no reason for alarm, and that the case should not affect poultry consumption.

Germany, Greece, Italy, Hungary, Slovenia and Austria are among countries that have reported outbreaks, mostly in swans.

March 16th, 2009 DINESHPUR - Authorities in Uttarakhand are keen to develop the Haripura Water Park, frequented by bird watchers as a prominent tourist destination to spot Siberian cranes and other migratory birds. Haripura Water Park, located near the Hariprua Dam, overlaps the Districts of Udahm Singh Nagar and Nainital.

June 26th, 2006 A World Health Organization probe revealed that the bird flu virus mutated within an Indonesian family. An Indonesian man who died from the H5N1 strain of bird flu almost certainly caught the disease from his 10-year-old son.

November 10th, 2008 Thailand, the world's fourth-largest exporter of poultry, had slaughtered millions of birds to restrict the spread of the bird fly virus. And six months back they able to declare themselves free of the killer virus.

July 8th, 2006 The country's (Indonesia) biggest vaccine producer, PT Bio Farma, is aiming to produce a vaccine against the deadly strain of the bird flu virus for humans by the end of this year. The company's president director, Marzuki Abdullah, said, the company had received a recommendation from the World Health Organization to produce a regular flu vaccine and would not find it difficult to produce.

November 14th, 2005 There has been a mutation allowing the bird flue virus to breed effectively on mammal tissue and become highly virulent. The Vietnamese research has shown the bug is adapting to infect humans in the biggest study of its kind.

No Bird Flu in Humans in India

February 24th, 2006 There is no bird flu in humans in the country with all the human samples, including the one sent to the National Institute of Virology, testing negative for the virus, officials said on Friday. ”The sample which was sent to NIV, Pune, on Thursday is also negative for the bird flu virus,” P K Hota, health secretary said.

April 24th, 2006 A peasant worker (surnamed Lai, a 21-year-old) has become the 12th Chinese person to die of the bird flu virus. The official Xinhua news agency says he died in the central city of Wuhan on wednesday.