Dog and Their Owners Find Ways to Damage Data

Computer owners, and their pets, find lots of ways to damage data.

One incident involved a dog that used a USB flash drive as a chew toy and almost ate all its owner’s data. 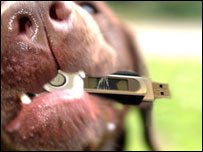 Also featured is a PC enthusiast who turned his hard drive into a box of spare parts when he tried to recover data himself.

But top of the list is an old laptop containing key company data that was found filled with cockroach corpses.
link [news.bbc.co.uk/2/hi/technology/4500482.stm]

April 22nd, 2006 Summertime health care is a very serious matter for all responsible dog and cat owners, because along with summer, come unwanted little irritants that if not protected against, can give your pet a summer to forget, not a summer to remember. Fleas, ticks, worms, and other mosquito propelled bacteria, parasites and viruses are just waiting to find a home on, or inside your beloved pet dog.

How To Keep Our Pets Happy

September 30th, 2005 Is Pluto scared or bored when left home alone? Does Riki have separation anxiety? Definitely, say a growing number of pet owners and experts in the pet-care field. Once upon a time, our furry little friends were really neglected and passed their days away in relative oblivion.

November 12th, 2005 Chicken-processing companies are buying insurance to cover possible damage claims from people infected by avian influenza (AI) caused by the consumption of infected chicken. The Korea Chicken Council (KCC) said Tuesday the companies have rising concerns about the spread of the disease.

Dear pet owners: Don't turn them loose or kick them out

October 11th, 2008 Pet owners we understand that sometimes situations turned out to be very critical, but we should not abandoned or neglet our pets. Let us find out some ways to demolish the trend of pets being shooed out the front door or abandoned in forest.

June 6th, 2009 NEW DELHI - A Chinese couple was stunned when they woke up to find that a 2-meter-long snake was sharing their bed with them. The two from Xiangfan, Hubei province, did not know what to do with the snake and decided to call the police on June 3, reports the China Daily.

How to Keep Pets Safe and Secure in Halloween

November 3rd, 2005 Halloween is really not a fun time for pets, with lots of noise, and strangers around, it can be a scary time rather. Let us find out some ways to keep your pets safe and secure — Pets should not be forced to wear costumes.

December 9th, 2005 Researchers have finished mapping the genome of the domestic dog. The results show among other things that dogs, mice, and humans share a core set of DNA.

July 22nd, 2009 WASHINGTON - In a new study, scientists have shown that when the coast horned lizard moved north from Baja California and spread throughout the state, it diverged into at least two new species, making it a total of three species. "When you stack up all the data sets, they all support three species," said lead author Adam Leache, a National Science Foundation bioinformatics postdoctoral fellow at UC (University of California) Davis.