China announced on Monday that it would soon begin testing its own human vaccines for bird flu.

Laboratory tests have already found the vaccines to be safe and effective on mice.

China’s Agriculture Ministry has said the country is producing more than 100 million doses of bird flue vaccine everyday - enough to deal with an epidemic.

The Ministry has stepped up production of the vaccine to guarantee supply and has the capacity to produce 16 billion doses of bird flu vaccine a year, if needed.

Using new technology, the vaccine can now be produced in 34 days, compared to a 44-day production cycle previously, Xinhua reported.

The news agency reported that the Agriculture Ministry has also started cracking down on counterfeit vaccines.
link [www.ndtv.com/template/template.asp?template=Birdfluscare&slug=China+to+test+bird+flu+vaccine&id=81318&callid=1]

China has vowed to vaccinate all of its estimated 14 billion poultry to contain the spread of bird flu. 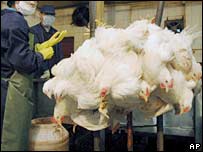 In his announcement, Chief veterinary officer Jia Youling said all the fees would be covered by the government.

The move comes as new outbreaks of bird flu were confirmed in several regions of China in the past month.

So far there have been no confirmed human infections in China, although several cases are being investigated.

The H5N1 strain of bird flu has killed more than 60 people in South East Asia since 2003.

July 3rd, 2006 More testing is needed before China can confirm whether a soldier who died in Beijing in 2003 was an early case of bird flu, the Health Ministry said Monday. The case, first disclosed last month in a letter by Chinese researchers to a US medical journal.

February 18th, 2006 An Australian drug company trying to develop a vaccine against bird flu said on Friday that early results from clinical trials were encouraging. CSL Ltd, based in the southern city of Melbourne, said it was confident the prototype for an H5N1 vaccine was safe and effective.

January 29th, 2009 Researchers from National Institute of Infectious Diseases, Japan, claimed on Thursday that they have developed a flu vaccine that can prevent a deadly pandemic of deadly bird flu mutation, and could also capable to fight against multiple viruses. According to researcher Tetsuya Uchida, the newly developed vaccine is based on common types of protein inside the bodies of flu viruses is highly effective as they rarely change.

April 24th, 2006 A peasant worker (surnamed Lai, a 21-year-old) has become the 12th Chinese person to die of the bird flu virus. The official Xinhua news agency says he died in the central city of Wuhan on wednesday.

Bird Flu Vaccine Could Be Industrially Produced By February

November 14th, 2005 According to the current tests a vaccine to prevent bird flu could be mass produced by February or March of next year, the director of the Russian Flu Research Center said Monday. The strain of the virus obtained by reverse genetics (the process of introducing mutations into a cloned DNA segment to investigate gene function) using a Vietnamese avian flu isolate and the vaccine testing program developed by the Flu Research Center, have been passed on to the Tarasevich State Monitoring Institute.

July 8th, 2006 The country's (Indonesia) biggest vaccine producer, PT Bio Farma, is aiming to produce a vaccine against the deadly strain of the bird flu virus for humans by the end of this year. The company's president director, Marzuki Abdullah, said, the company had received a recommendation from the World Health Organization to produce a regular flu vaccine and would not find it difficult to produce.

2 Responses to “China Would Soon Being Testing Bird Flu Vaccine”