Bird Flu Measures Are Set To Come Into Force

Measures designed to combat the threat of a bird flu pandemic are comming into force today. 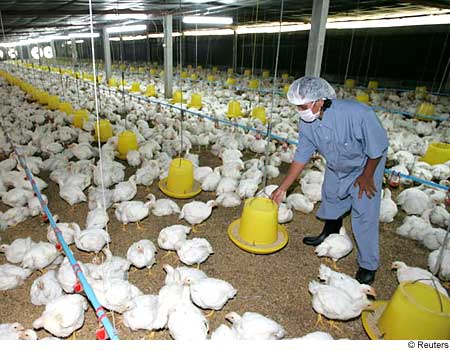 The UK Government has introduced a ban on the sale and display of birds at markets, shows and fairs around England, with separate arrangements for Scotland and Wales.

It is also enacting new regulations within days to comply with other EU-wide anti-bird flu measures.

Ministers are considering whether to order free-range chickens to be brought indoors to minimise the risk of them catching the virus.

A register of commercial poultry producers is also to be set up.

Dr Klaus Stohr, of the WHO, told the committee even a mild pandemic would affect 25-30% of the world’s population, killing two to seven million and leaving 28 million needing hospital treatment.

The federal government said yesterday it has awarded a $62-million contract to Chiron Corp. to manufacture a bird flu vaccine, (Sanofi-Aventis already has a $100-million contract to produce anti-bird flu shots), and the Senate moved to invest far more - $8 billion - on preparations in case the flu strain sparks a worldwide epidemic.

At the same time, Swiss company Roche Holding AG said demand for its Tamiflu antiviral treatment is so extreme that it has stopped shipping it to private U.S. suppliers to thwart hoarding.

The American Medical Association opposes personal stockpiling and says the misuse of Tamiflu could lead to drug-resistant flu strains.

February 7th, 2007 A fresh outbreak of bird flu has been confirmed in the Pakistani city of Rawalpindi, a year after thousands of chickens were culled to contain the disease, news reports said Wednesday. Forty birds at a poultry farm in Islamabad's twin city died of the H5N1 strain or were killed while infected, according to the Ministry of Food, Agriculture and Livestock.

Egyptian Woman From Cairo Has Died From Bird Flu

May 5th, 2006 Fifth person died from bird flu in Egypt on Thursday and experts in Asia expressed concern that poorer countries were unable to put up a co-ordinated fight against the rapid spread of the H5N1 virus. The woman died in a Cairo hospital soon after the World Health Organisation confirmed she was the 13th person to be diagnosed with bird flu in Egypt.

November 26th, 2005 Animal lovers (in Singapore) will soon have something to cheer about: in six months, new measures are due to kick in to deter pet abandonment and poor pet welfare. Each year, some 6,000 dogs and 12,000 cats have to be put to sleep, while about 700 pet owners are fined for keeping unlicensed dogs.

October 21st, 2005 The European Union has decided to ban on imports of pet birds and feathers from Siberia, Russia. The move follows the confirmation from Moscow of an outbreak of the deadly bird flu H5N1 virus reached western Russia with an outbreak in a village 350 kilometres south of the capital.

March 2nd, 2006 A swan found dead in northwest Serbia has tested positive for the H5 strain of bird flu, but further tests at a British laboratory will determine whether it is the deadly H5N1 virus, according to a statement issued by the Agriculture Ministry on Friday. The sample from the dead swan, discovered in a swampy area near the Danube river, will be sent to the European Union's laboratory in Weybridge, England, for more detailed analysis, the government will undertake measures envisaged by law to prevent the spread of the disease before even receiving the results of the analyses requested from the Weybridge institute, the ministry said.

No Bird Flu in Humans in India

February 24th, 2006 There is no bird flu in humans in the country with all the human samples, including the one sent to the National Institute of Virology, testing negative for the virus, officials said on Friday. ”The sample which was sent to NIV, Pune, on Thursday is also negative for the bird flu virus,” P K Hota, health secretary said.

October 6th, 2005 If a virulent strain of avian influenza ever struck the U.S. poultry industry, this country probably would fare better than many other nations, due to careful biosecurity procedures in force.